They came, they conquered and they raised funds for children with special needs. This past Saturday, the 5th annual Remington Race for Pace was a success with over five hundred Calgarians embracing a new ‘Superhero’ event theme, supporting local charity, Pacekids Programs.

Early morning showers could not keep event supporters away as hundreds donned superhero garb on Saturday, June 23rd, demonstrating support of the Pacekids Programs’ annual Race for Pace. This came as no surprise to event special guest, Superintendent Ray Robitaille:

“Quite simply, the weather didn’t matter. I was inspired by the courage in which the children and parents handled their challenges and was deeply moved by their determination and perseverance to make the best out of life, one goal at a time. It was truly an honour to present the children with their Pacekids graduation capes and to witness their excitement about achieving another goal they set for themselves. It was equally rewarding to see the pride in their parents faces as they watched their child take that next step in life. The race was aptly named the superhero race, because on that day I was surrounded by people who represent the best in all of us, they are the superheroes.”

Superintendent Robitaille was joined by MLA Linda Johnson, Deputy Mayor Alderman Brian Pincott, and numerous prominent community members in celebrating the little superheroes of Pacekids Programs, taking in the joyful and emotional recognition of the charity’s children and their families.

Pincott, who served as the 1K Superhero Parade marshal, was thrilled to be involved, “it was my honour to be able to participate in the Race for Pace. Pacekids is an organization that adds to the quality of life of all Calgarians, working each and every day to ensure that everyone can participate, no matter their ability.”

The event’s superheroes included the inspiring children from Pacekids Programs, the gracious volunteers, and real-life heroes, such as Robitaille, all connecting in the spirit of community. “I believe what makes [our community] great, is the abundance of wonderful people who are always willing to lend a hand and help others. We don’t often see their actions making headlines or see them seeking the spotlight, urban myth says they are few and far between, but if you want to find them go no further than a charitable event like Race for Pace, they were everywhere,” beams Robitaille.

With nearly a quarter-of-a-million raised for Pacekids Programs in its five years, the Race for Pace, founded by passionate mother Shelly McInnis, continues to strive to bring awareness to the Calgary-based charity that impacts the lives of hundreds of families. McInnis reflects about this year’s event:

“Each year I proudly watch my daughter, Darcie, a Pacekids graduate, cross the finish line and never lose sight of the impact Pacekids has had on our lives. Educate, enlighten and enrichment are all part of the equation. This year we decided to change up the 1km fun walk to a Superhero Parade, encouraging the kids to dress as their favourite superhero. Feedback since this Saturday’s event has been overwhelming. Not only did the kids have great fun, the experience also left them educated and inspired by those working so hard to cross the finish line. The experience has given new meaning to their Superhero costumes. Who knew that adding a simple superhero theme would provide such a profound experience to participants.” 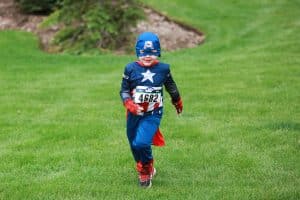 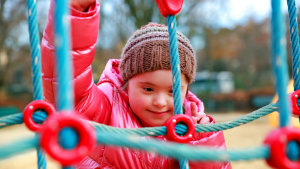 Not sure what to do with your kiddos with special needs when they are out of school during Spring Break? Here is a list of 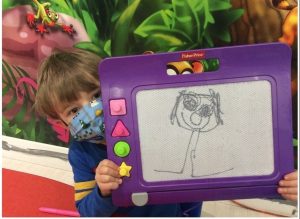 Nolan is a sweet Kindergarten-aged boy who is supported in Pacekids’ afternoon Speech and Language Enhancement program. Diagnosed with Childhood Apraxia of Speech (CAS), Nolan has struggled the 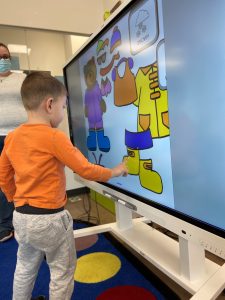 Thanks to our generous friends at the Burns Memorial Fund, Pacekids has been able to purchase a Smart Board for our north school. A Smart